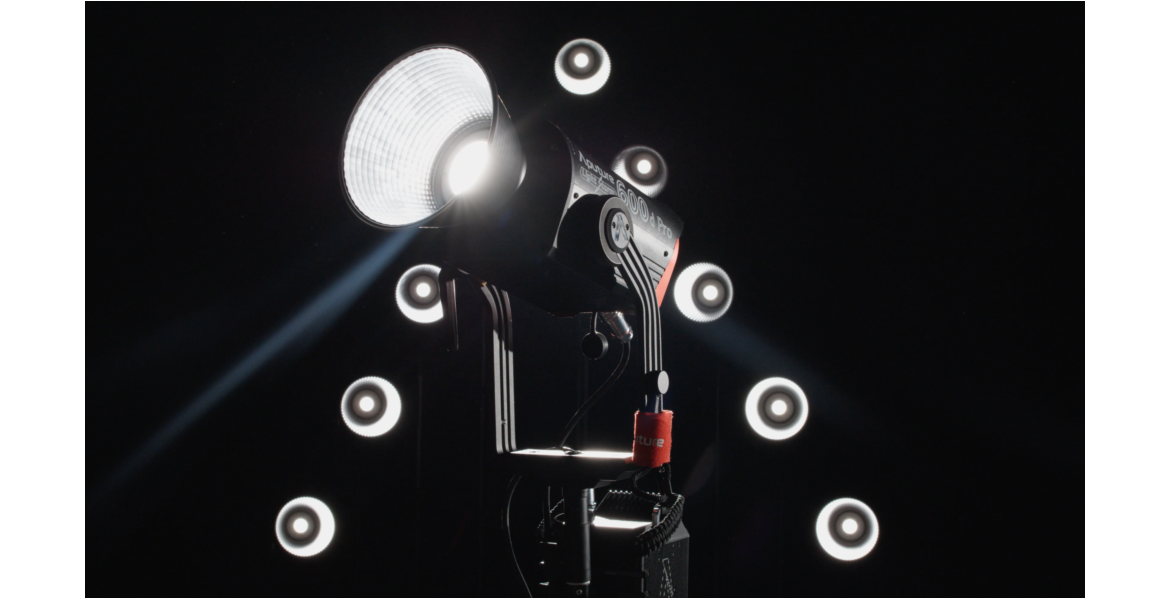 Aputure was founded in 2005 by a team of inspired filmmakers and videographers who wanted to create high-quality content but were challenged by the high cost of the equipment needed to make it happen.

COB is the acronym for Chip-on-Board, which is the core technology of most of Aputure's point light sources. Chip-on-board LED technology condenses many small LEDs onto a single chip, which increases its efficiency and output. This configuration also emits light from a single source, unlike the multi-source LED configurations found in standard LED panels. COB lamps, such as the LS C300d II, not only allow for more illumination, but the spotty nature of the light also allows the fixture to produce sharp, hard shadows, which would be much more difficult to create with an LED panel. They are also easier to work with, thanks to their modifiers: Fresnels, softboxes, shutters, Chinese balls and projection lenses.

The 300d Mark II produces 20% more light than its predecessor. Combined with the Fresnel 2X, it can produce up to 90,000 lux, which is close to the output of a 575W HMI.
Its new yoke allows for 360° of rotation so you’ll be able to secure the light in any position, with any modifier.

The 300DII's control box is totally silent, made of aluminium alloy, with an integrated antenna and a military-grade strap. It is also the first lamp to feature the Aputure quick release plate and clamp, allowing it to be securely attached to any stand, bracket or bar.

The 300d II features new technology that allows users to power the fixture from a single battery with half the power. The included 6m Neutrik cable provides a reliable, lockable power connection and the optional 7.5m 5-pin XLR cable lets you keep the control box close by at all times.

The 300d II incorporates lighting effects such as explosion, bulb failure, TV, strobe, paparazzi, flash, fireworks and pulse. With 0-100% dimming control, the 300d II can be used in low light environments or to dominate the sun; it features 4 different dimming curves: Linear, Logarithmic, Exponential and S-curve.

The 300d Mark II is controllable by application. Using Bluetooth SIG network technology, Sidus Link™ allows you to control your lights up to 400 metres away, linking multiple lights up to 80 metres apart. 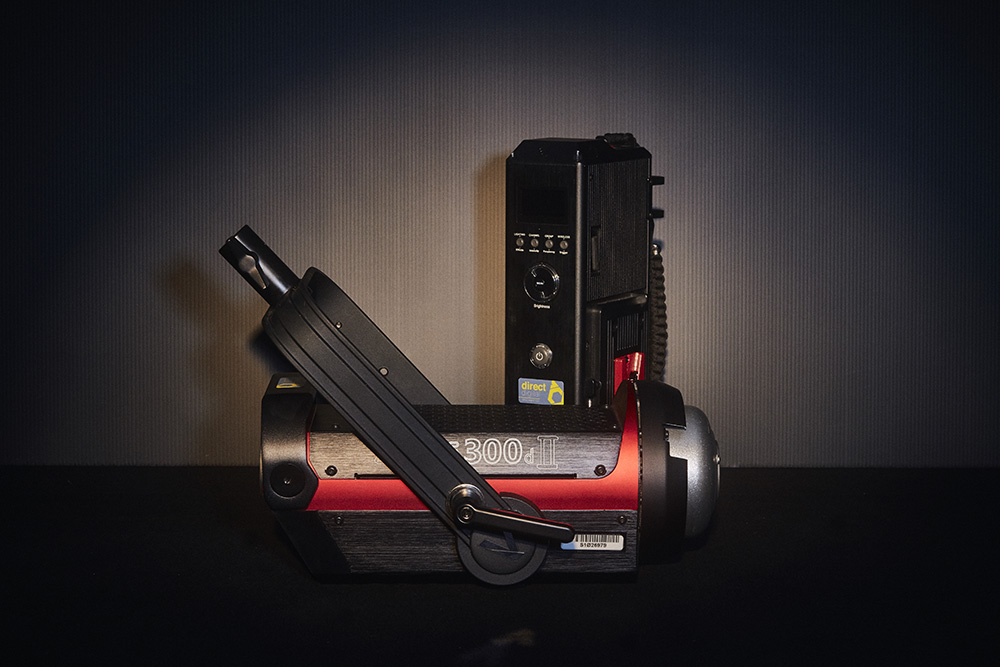 Every aspect of the LS 600d Pro has been designed with professionals in mind, with incredible output, a weatherproof construction, a wide variety of power options and professional level lighting controls including Sidus Link, Art-net and wireless DMX. Enough to compete with traditional lighting.

Equipped with its native Hyper-Reflector, the 600d Pro can output 8,500 lux at 3 meters (10 feet). With the F10 Fresnel modifier, the combination can reach an illuminance of 29,300 lux at 3 meters in a 15° spot. With a maximum power draw of 720W, the 600d Pro is on par with industry-standard HMI lights. The LS 600d Pro is the first Light Storm fixture and the first Bowens-mounted LED to be designed to be weatherproof.  It also offers improved smooth progressive dimming and 0.1% incremental light control, allowing you to get the exact amount of light you need.

With high colour accuracy metrics of CRI≥96, TLCI≥96, CQS≥95, and an SSI (D56) score of 72, it provides consistently accurate white light for filmmakers, meeting a colour temperature standard of 5600±200K.

The LS 600d Pro can be used with 14.4V, 26V, 28.8V high-efficiency batteries. And when plugged into the mains, it becomes the first projector that can be used both as a high-intensity projector and as a backup charger for V-Mount and Gold Mount batteries.

The LS 600d Pro also features the 8 light effects: "Paparazzi", "Fireworks", "Lightning", "Faulty bulb", "TV", "Pulse", "Strobe" and "Explosion".
Ultra-quiet and powerful, it does not cause excessive sound interference on your set.

The 600d Pro's Bowens mount makes it compatible with Aputure's modellers such as the F10 Fresnel, Light Dome II, Spotlight mount and Lantern, as well as third-party accessories such as the DoPchoice 5ft octa. However, its high output does not allow compatibility with the Fresnel 2X or Aputure's standard shutters. For more information, please see the compatibility table here.

Sidus Mesh integration allows the 600d Pro to be controlled from almost any smartphone or tablet with the Sidus Link mobile app from up to 400 meters away with the addition of other devices, including the Aputure LS C300d II. 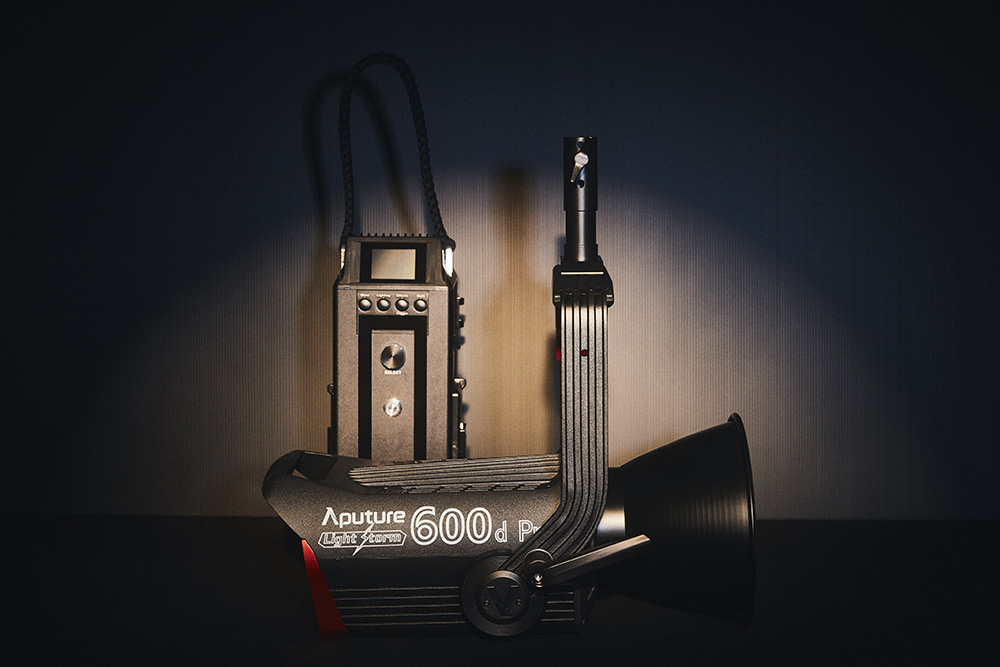 The Fresnel 2x allows you to intensify the light of the COB 300 Mk II. It includes two optical intensifying elements, a large 5.5" front Fresnel lens, improved ventilation and the elimination of light leaks.

With its rotating barrel, the focus is smooth and gives users an ability to accurately finesse the beam angle of their light source, allowing you to easily spot or flood your light with a simple twist.

Combined with the Aputure Barndoors, your light shaping options are endless. 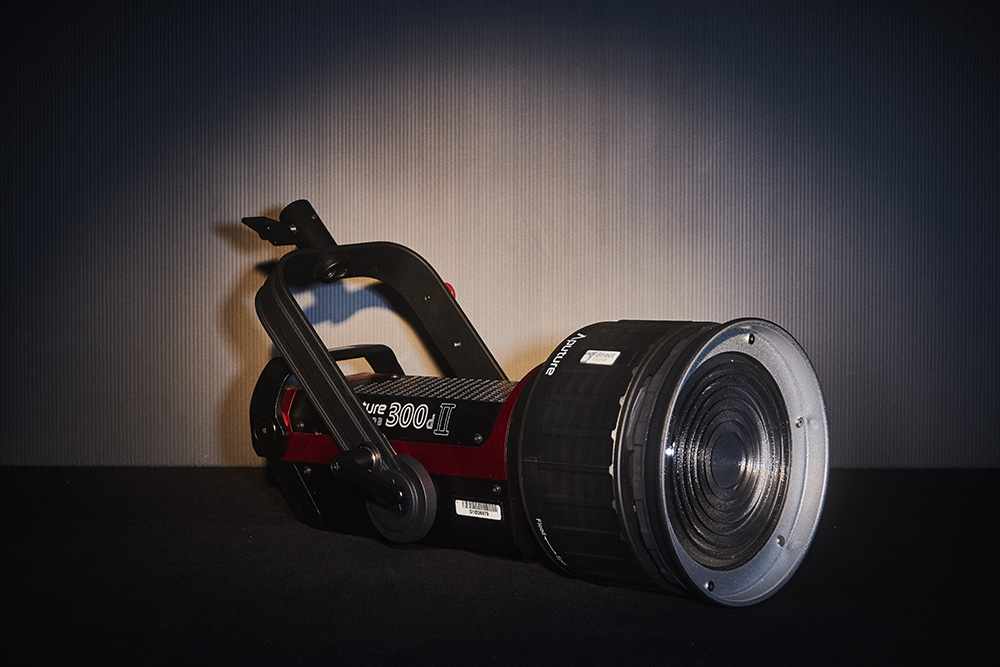 Designed specifically for COB 300 Mk II lamps, the Aputure Barn Doors are the optimal solution for shaping your light. With four black velvet-coated wings to maximise light absorption, they ensure that there is almost no light leakage or reflection. They also include a 30° honeycomb grid and a magnetic gelatine holder to suit all your needs. The shutters attach directly to the COB 300 Mk II or the Fresnel 2X. 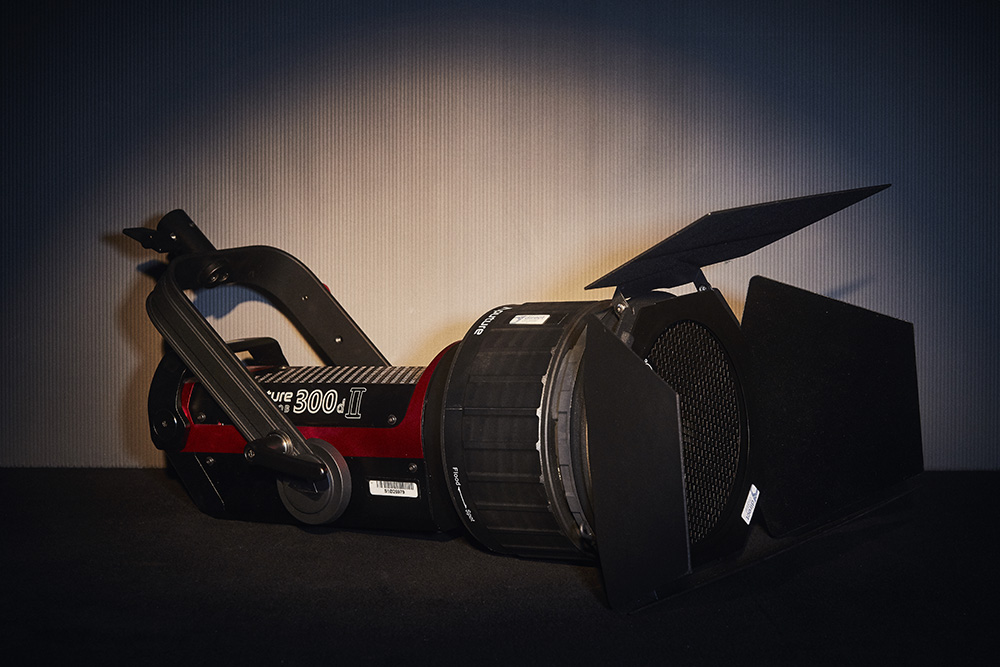 With its impressive 250mm diameter, the Fresnel F10 not only intensifies the output of your source enormously but also gives a similar quality of light to a Tungsten 5K or Studio 2K.

By using a rear aspherical focusing element, you can achieve up to 340% more output in flood mode. To ergonomically and precisely adjust the variable beam angle from 15° to 45°, you simply turn the lens ring and adjust the spot/flux controls.

In addition, it features an industry-standard drop-in accessory slot that allows you to mount F10 Barn Doors or a 13" (330mm) scrim. 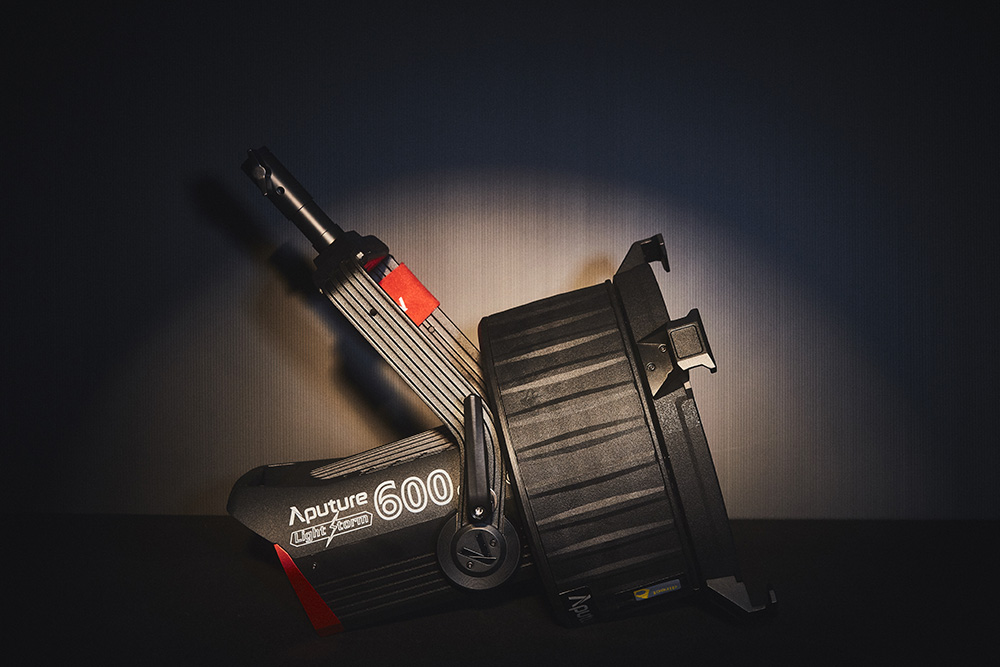 The F10 Barn Doors are designed for the Fresnel F10 and fit into its standard 333mm (13.1") accessory slot.
Unlike traditional Barn Doors, the F10 Barn Doors feature an 8-leaf design, including four smaller " helper flags" that can rotate to adjust the shape of the output to suit your needs. They include a Black Reflector Dish for sharper shadows.

Each set of Barn Doors also includes a safety cable and mounting point, so you can use them with confidence on set. 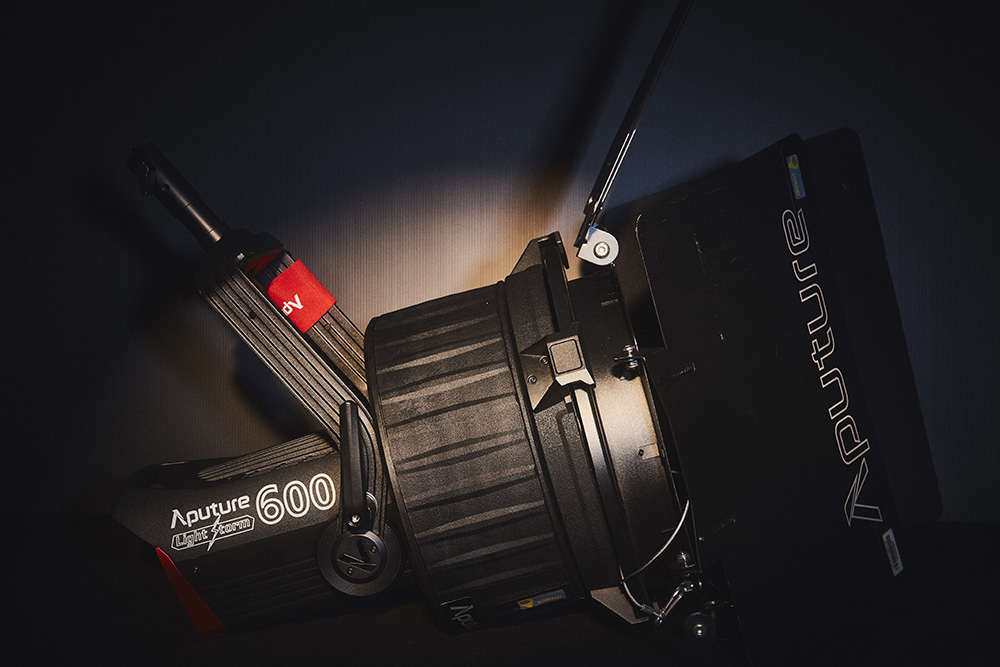 The Light Dome II is an exceptionally round softbox that produces perfectly circular catchlights, designed to work with all Light Storm COB fixtures. It features two diffusions (1.5 and 2.5 stops) that create a beautiful soft light and envelop your subject very evenly. They also features a quick speedring, allowing you to open or close the dome in seconds, and is designed to be compatible with the included gelatin holder to maximise your gelatin capabilities while minimising the amount of material required. Inspired by a beauty dish, the Light Dome Mini II has a shallower design than the Light Dome, making it the ideal choice for creatives who need soft light in a smaller space. Also compatible with all COB projectors, it features Aputure's fast speedring which allows you to open or close the dome in seconds. With its 1⁄4 gridded fabric and gold/silver inner reflector, it mimics the beauty dish to achieve a stunning quality of light.

Like its big brother, the Mini Light Dome II comes with a specially designed gelatin holder to maximise creativity while minimising gelatin used.
The 40° fabric honeycomb is included to help you refine your cinematography and control the spread of your light. 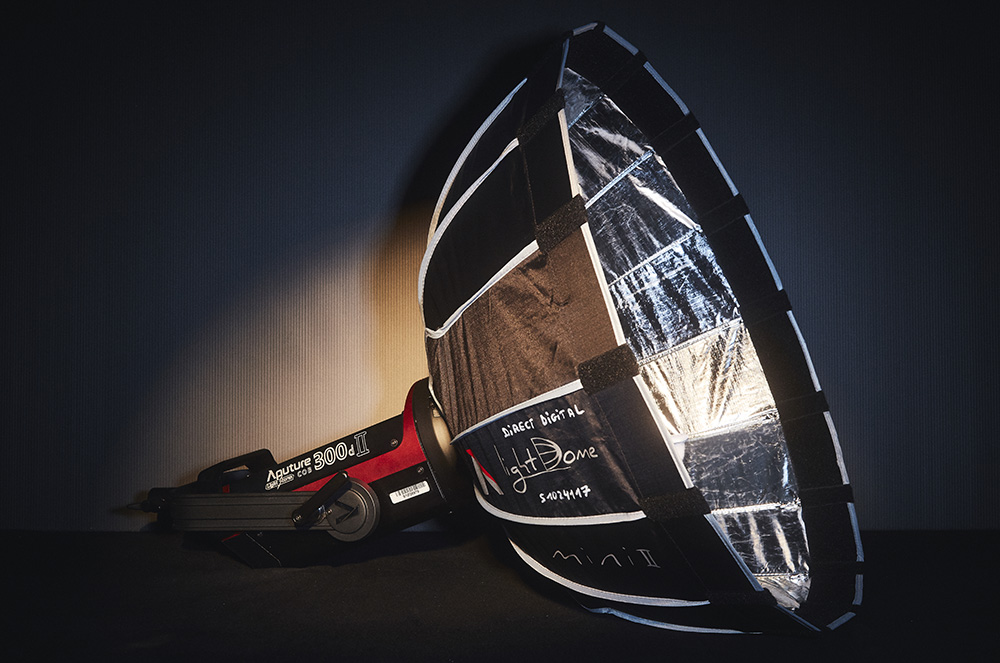 This spherical softbox opens and is ready to use in seconds. With the Lantern, you can produce soft, even light wherever your shots take you.

Thanks to its 26-inch spherical design, the Lantern diffuses the light from your LED in all directions with a beam angle of 270°.

The Aputure Lantern is one of the only spherical softboxes on the market with a fully adjustable 4 section light control skirt. Using a hook and loop system, the removable skirts can be fixed in any position to quickly and accurately control your light.

With its quick-release frame, the Lantern can be assembled or disassembled in seconds, allowing you to install fewer lights, faster. 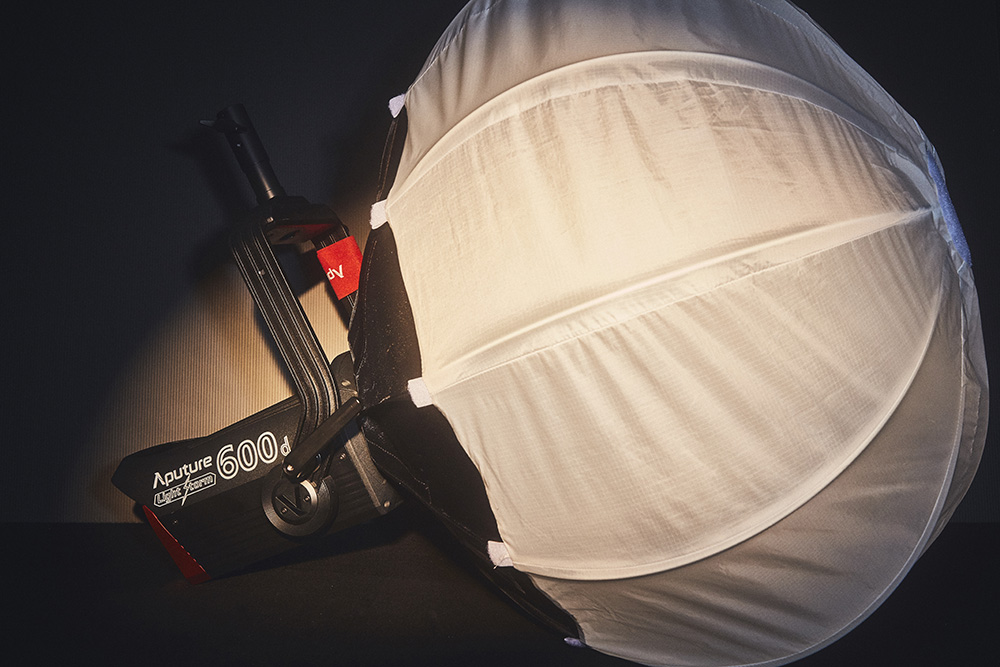 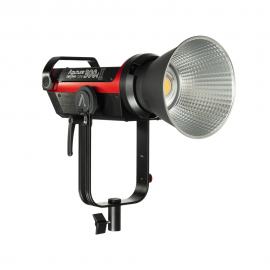 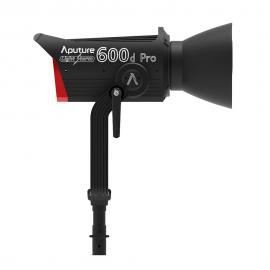 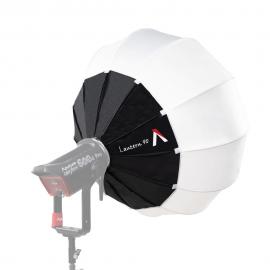 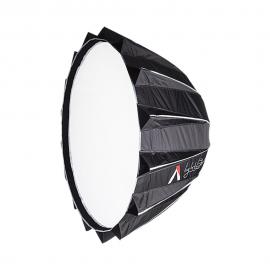